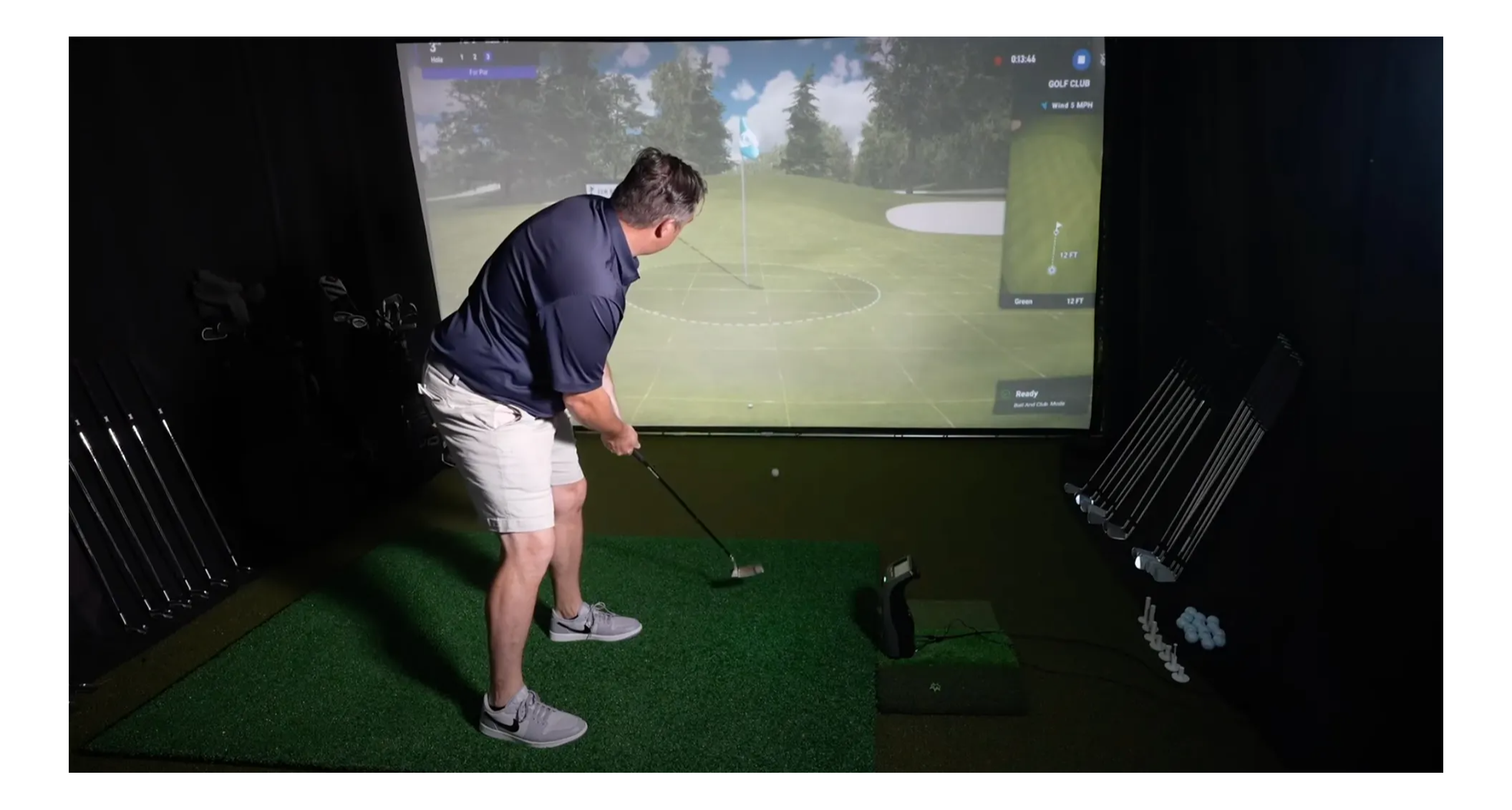 Golf simulators are revolutionizing the way that people enjoy this great game.

No longer is a realistic golf experience limited to the actual golf course. More and more people are playing, practicing, and competing in their living rooms, basements, garages, sheds, storage units, or wherever else they can find space. We’re even seeing wildly successful bars and restaurants that sell golf simulation as the main attraction.

But for all that simulators do so realistically, there’s one key component seen as a real limiter by any true golf hardcore. And that’s putting.

Golfers know that on the course they use their putter more than any other club. So, if you’re serious about simulating a realistic golf experience, you’d better be serious about golf simulator putting. 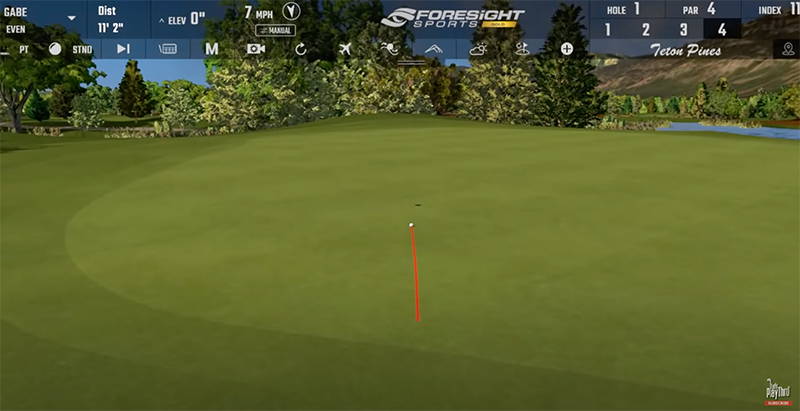 How Does Putting Work on a Golf Simulator?

When it comes to putting on a golf simulator, you’ve got three general options:

Now, let’s be real: Even the best putting simulator setup will fall short of an in-person experience.

You could argue that hitting any club on a home golf simulator isn’t the same as on the actual course. And that’s true to an extent. Generally, when you’re using a simulator, you will be hitting off a mat or at a driving range. That means you don’t have the uneven or bare lies you might encounter with the real thing. In other words, the setup for each shot is perfect, which any golfer knows isn’t realistic.

That said, with full shots, you are still swinging the club just as you would on the course. And how you impact the ball (spin, where on the clubface you make contact, etc.) will produce the same distance and direction you’d get on the course.

There are even options for creating a more realistic experience, including mats with longer turf to simulate the rough. And most simulator software will adjust the distance and direction of your shots based on the simulated conditions, like if you’re hitting into the wind or out of the sand, etc.

But with putting, it’s a bit further from reality. That’s because putting on a mat isn’t going to allow for the undulation and speed changes you’d face on the actual course. Sure, the simulator will indicate if your putt is uphill or downhill or breaks left or right. But you’re still going to be putting in a straight line on a mat with a level surface. After you’ve made your stroke, the simulator will indicate whether you hit it too hard or soft based on the simulated conditions.

Bottom line: There’s just no way to perfectly replicate putting on an actual green in outdoor conditions. But some products get closer to reality than others. 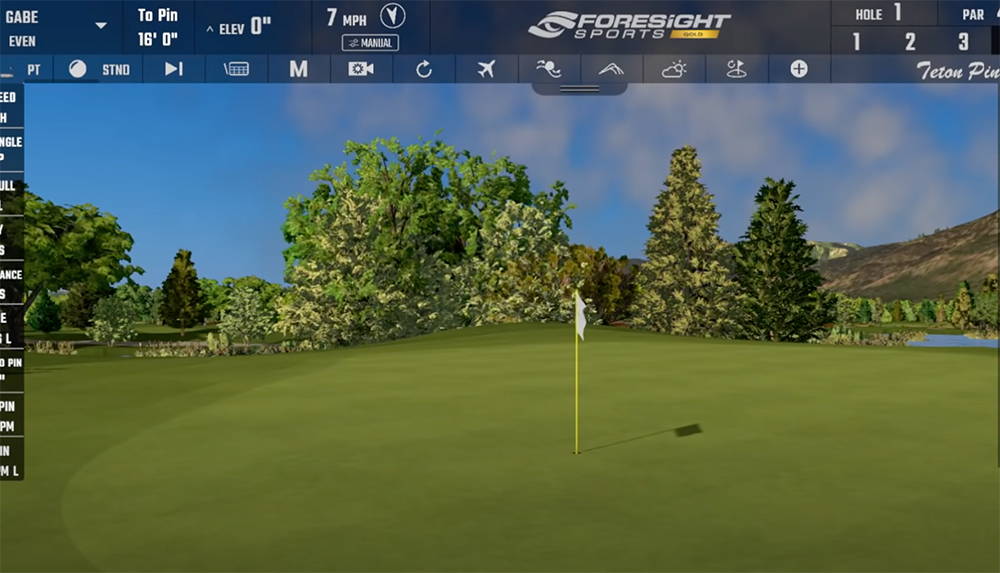 Each of the below products does the same basic things. Each is a golf launch monitor that uses cameras or doppler radar technology to measure where the ball is going and how fast it’s going there. They then interface with simulator software to give you a visual display of your golf ball moving on a simulated course.

What separates these best golf simulators with putting from other options? It comes down to accuracy, reliability, and ease of use.

First of all, each of these simulators measures putts. Remember, not every golf simulator does. But beyond that, each selection delivers consistent, accurate, reliable data. And when it comes to putting, that’s something you definitely won’t find with every golf simulator. 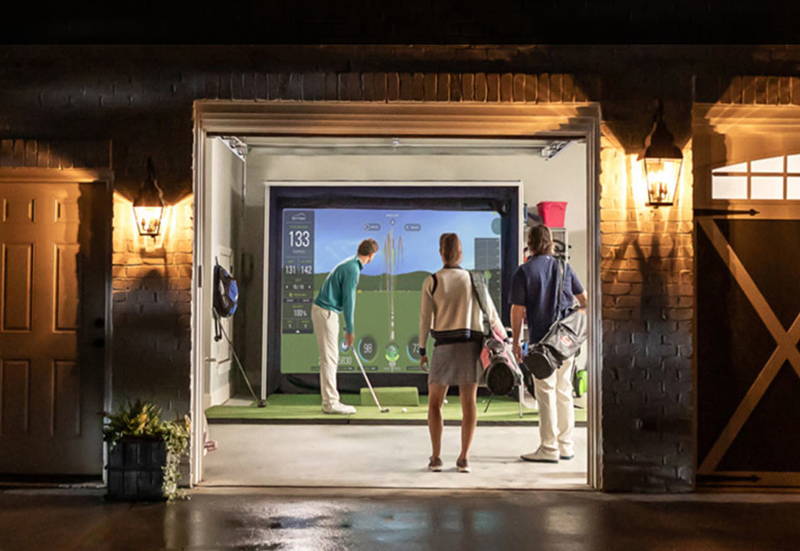 The Mevo+ comes with a subscription to e6, one of the very best golf simulator software providers. You get five golf courses right out of the box, with additional courses available for purchase.

One of the great benefits of the Mevo+ is the ease of setup. It’s not an exaggeration to say that you can be set up and measuring shots, including putts, within minutes of unboxing. However, paying attention to setting the device up correctly will make all the difference in capturing consistently reliable data.

The most important thing to remember when tracking putts with a Mevo+ is that the device needs to sit on the same level as your golf ball.

The Mevo+ measures from about 8 feet behind the ball. A typical home simulator setup includes a hitting mat, which is generally several inches thick. If you set your Mevo+ up on the floor, a few inches below the surface of your mat, you will not get accurate putting results. That setup will work fine for measuring your full shots, but the Mevo+ needs to sit at the same level as the ball to capture putting data accurately.

So, when considering the Mevo+, make sure that you factor in having a large enough mat to allow your hitting zone and device placement to be on the same level.

Another tip for achieving your best setup is to choose a mat that’s long enough to allow you to roll the ball several feet after contact. This will allow the Mevo+ to reliably read the putt and give you the most accurate results. 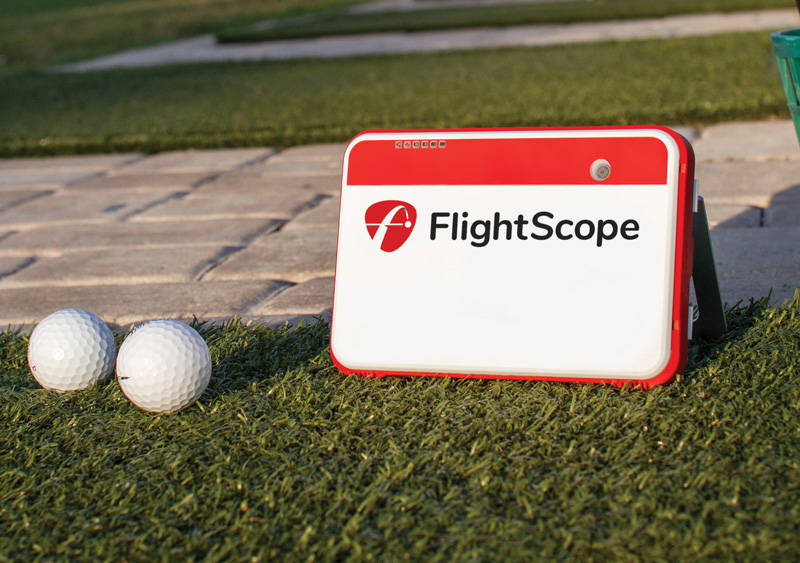 One of the coolest things about the Bushnell Launch Pro (or its sister product, the Foresight Sports GC3) is that the unit is set up to the side of the golf ball, rather than from behind. This can save you a lot of room depth space for your indoor golf simulator setup.

And along those same lines, when it comes to putting, the Launch Pro doesn’t need as much space to accurately read putts as other simulators. With the Launch Pro, you can get reliable readouts after the ball travels just 12 or 14 inches. That’s a huge space saver!

Another awesome advantage to the Launch Pro is that it allows you to putt out even the short putts. Some devices have a “gimme” range, meaning that anything inside of, say, 3 or 6 feet is an automatic make. But what about when you’re playing your buddy for all the marbles, and you want to make him sweat that short putt on 18? The Launch Pro gives you that opportunity to make things more interesting.

But really, what makes the Launch Pro a best golf simulators with putting leader is its consistency. This thing just works—over and over again. 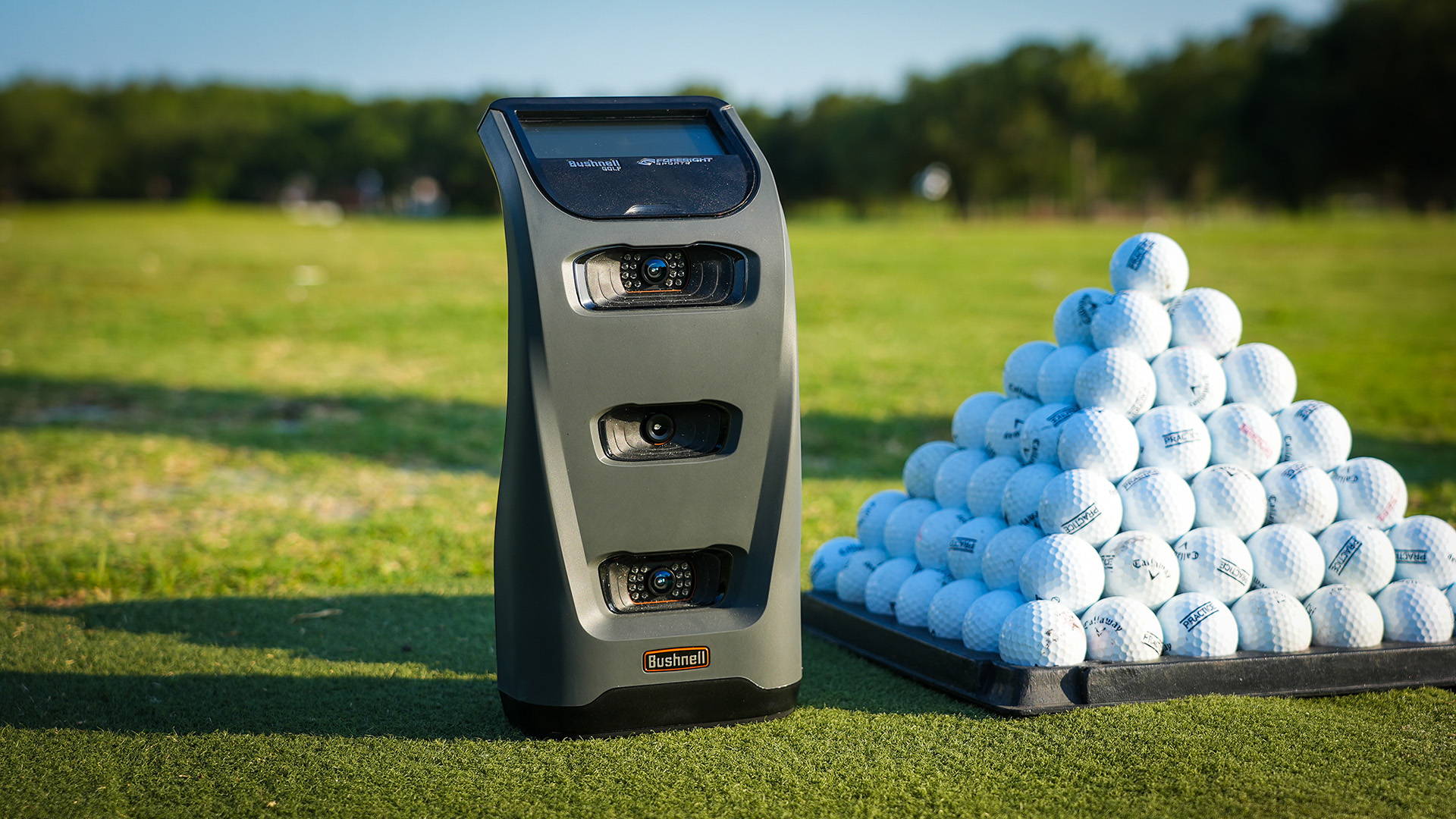 A significant advantage of the SkyTrak is that it integrates with various simulator software options. A more software-agnostic device is nice because you may prefer a particular software package or group of golf course options. Or, you may tire of what you have and want to change it up. The SkyTrak gives you that versatility.

And like the Bushnell Launch Pro, the SkyTrak also reads shots from the side rather than behind. Again, this is a big deal because not everyone has the full room depth required for some simulators. The SkyTrak allows you to operate in tighter spaces.

As for putting, the SkyTrak’s photometric system is capable of outstanding accuracy. However, the device can get a bit finicky, and the correct setup is paramount. Flickering lights, for example, can cause an issue that will yield inaccurate readouts. The same goes for having the unit set up even slightly off-center.

But if you nail the setup, you’ll enjoy one of the best golf simulators with putting. 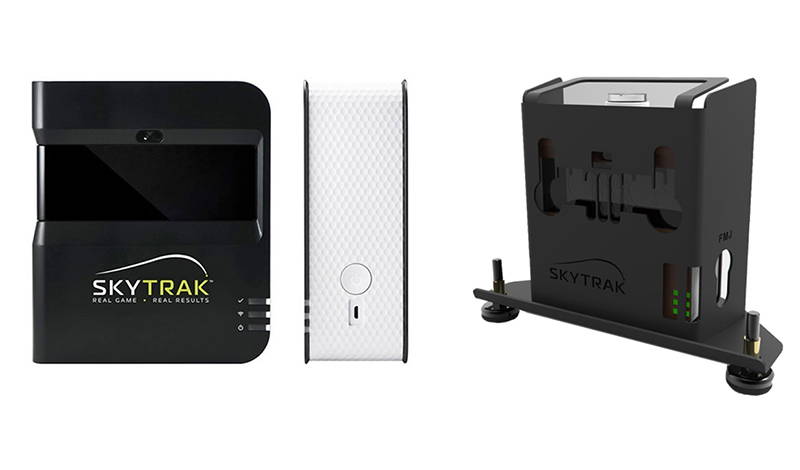 If it's good enough for Tiger Woods, don’t you think it’s worth your consideration? That’s right: This is the simulator tried and tested by Tiger Woods, arguably the best golfer (and putter) ever.

The beauty of the Full Swing KIT is that you get an unbelievable assortment of data metrics right out of the box. A unit like the Bushnell Launch Pro requires varying levels of subscriptions to unlock all of the good stuff. With the Full Swing KIT, you get 16 club and ball data points through the device’s free app.

Full Swing has improved putting simulation considerably from their earlier generations of products. They’ve now taken all the contours of each green into consideration. You can choose a target-line display that will indicate the direction the putt will break, or you can set the display up to show a grid that identifies the fall lines on the green.

One thing about the Full Swing: Anything inside of 6 feet is an automatic gimme. Some will like that as it keeps the round moving. Others may prefer a device that allows you to putt everything out. 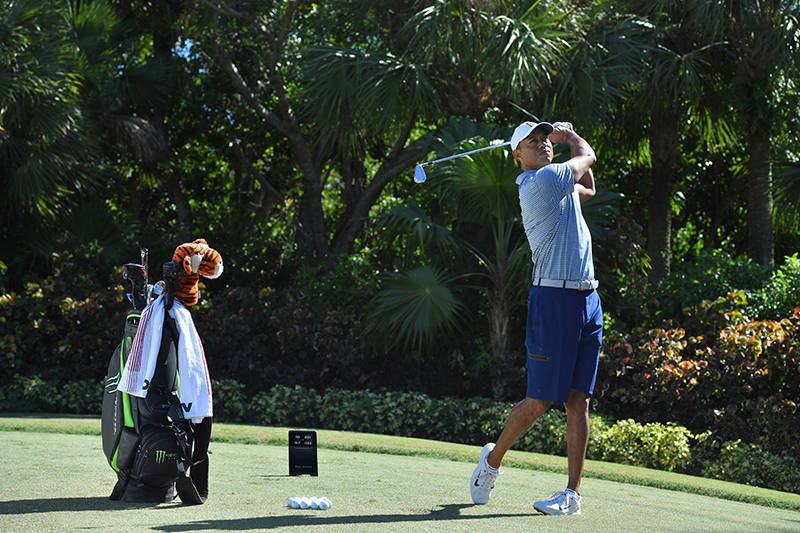 A simulated golf experience is incomplete without something at least close to realistic putting. It’s such an integral part of the game. How so many simulator/software combinations fall so far short of the real thing is baffling.

No device perfectly replicates an on-course putting experience. But these four simulators and accompanying software packages get pretty darn close.

To achieve the best results, consider incorporating a dedicated putting mat into your home golf simulator setup. That will give you your most true roll and allow for more meaningful putting practice.

Also, be precise with your simulator setup. You don’t want to lip out putts only to realize that your device wasn’t correctly measuring your ball path.

To play golf from the comfort of your home is the ultimate dream for anyone passionate about the game, especially if weather or schedules make getting outdoors challenging.

But if you’re gonna do it, do it right. Make it as lifelike as you can. Buy one of these four devices, and you’ll have the complete package. 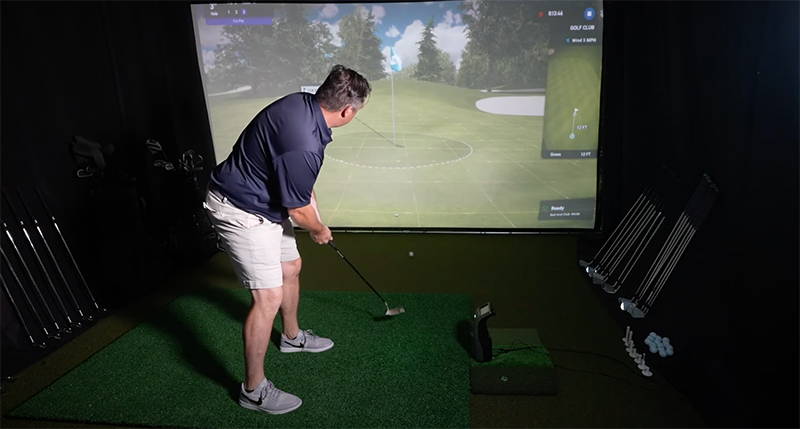