WHY? Accuracy, Highly Portable, Great In-App Data, Easy to Set Up & Use

Shop Them Now on the PlayBetter Golf Store!

Search for New or Open Box Deals on the RePLay Golf Warehouse!

In this article, we're posting Gabe's results in 8 categories:

So check out Gabe's video of this informative golf launch monitor comparison review and feel free to use this article to see his results for each category.

Click on any of the launch monitor images below to learn more about a product or visit the PlayBetter Blog for more in-depth details about these unique golf gadgets.

Golf Launch Monitors Under $600 — Ease of Use

Ease of use includes how easy the launch monitor is to set up and get you on to your experience. In this category, the Approach G80 took the win. And the Approach R10 and Mevo tied as the runners up.

No app is required, so no registering or pairing with the device is involved. Simply fire the G80 up, place it 8-10 inches from the ball, then start swinging and getting results!

WATCH A FULL REVIEW OF THE APPROACH G80

Gabe found both of these easy to set up, which consists of simply registering in the app, starting up the device, pairing—and you're good to go! Both set up in a minute or so once registered for the app, which is easy for each, along with great user experience.

Still very easy to set up and register for the app, but takes only slightly longer than the previous devices because it works with your iPhone.

WATCH THIS RAPSODO MLM REVIEW ON LET'S PLAY THRU

The app was just a little finicky. While you don't have to sign up and register a user name for the app, this also means that if you use your phone while using the app (checking a text, for example), it can be hard to know if you've stayed connected to the app and are in the same session.

Gabe found the initial setup with this app to be a not-so-great experience. It took him quite a while to set up the app and get registered.

In fairness to the SC3300i, Gabe did review this product right after the MySwingCaddie app was overhauled and the device was released, and Swing Caddie, like many trusted golf brands, does a great job of fixing bugs and updating their products.

This category refers to the performance data that these portable launch monitors measure and the stats you get. The Approach R10 takes the lead on this one, with the most robust amount of data points.

Gives you Ball Speed, Launch Angle, Launch Direction, Club Head Speed, Club Path, Back Swing and Down Swing Times, Angle of Attack, Club Face Angle, Spin Rate, Spin Axis, Observed Ball Flight Range, Carry Distance, Total Distance, Smash Factor, Swing Tempo, and Apex Height. Like all the devices in this list, the R10 is a doppler GLM, not camera-based, which means that some of the metrics, like Spin, are calculated. All in all, Gabe found it to be really useful, especially the Club Pat data for shot shape.

This one gets an edge because in addition to all of the standard stats these devices provide, it also has a built-in shot tracer that shows your shot as soon as you swing. It also measure Ball Speed, Launch Angle, Launch Direction, Club Head Speed, Carry Distance, Total Distance, Smash Factor, and Apex Height.

Not quite as robust as the others, the ESB1 gives you Ball Speed, Club Speed, Distance, Smash Factor, Spin Rate, and Launch Angle.

Taking up the rear, the G80 offers Estimated Carry and Roll, Club Head Speed, Ball Speed, and Smash Factor, as well as Tempo, which is nice for swing training, but a less common GLM feature. 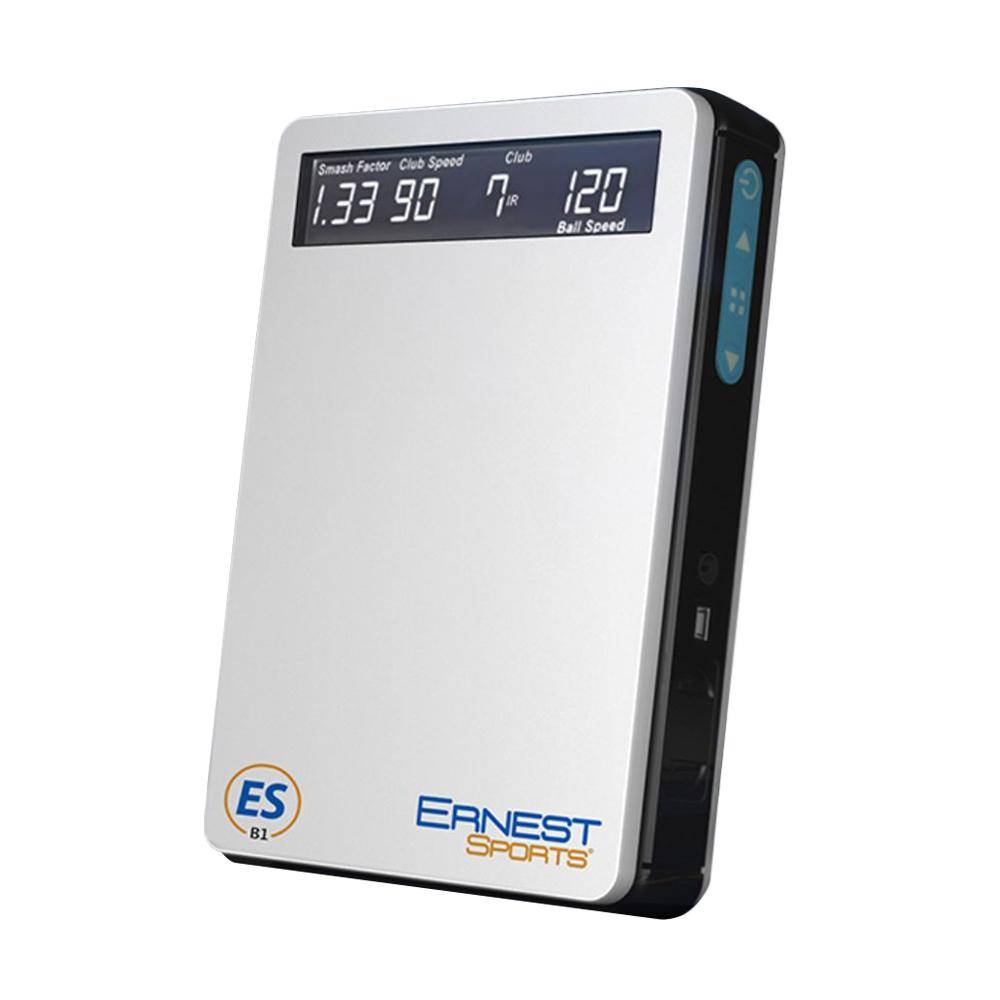 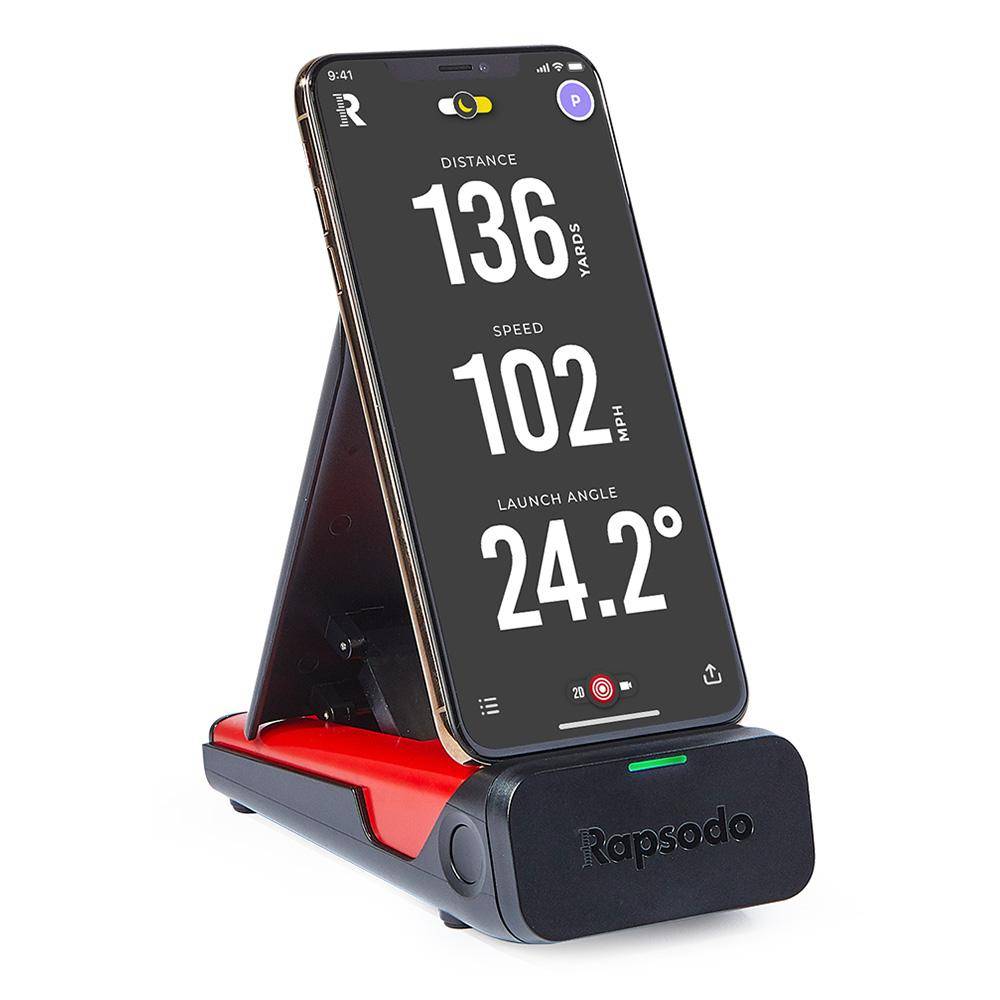 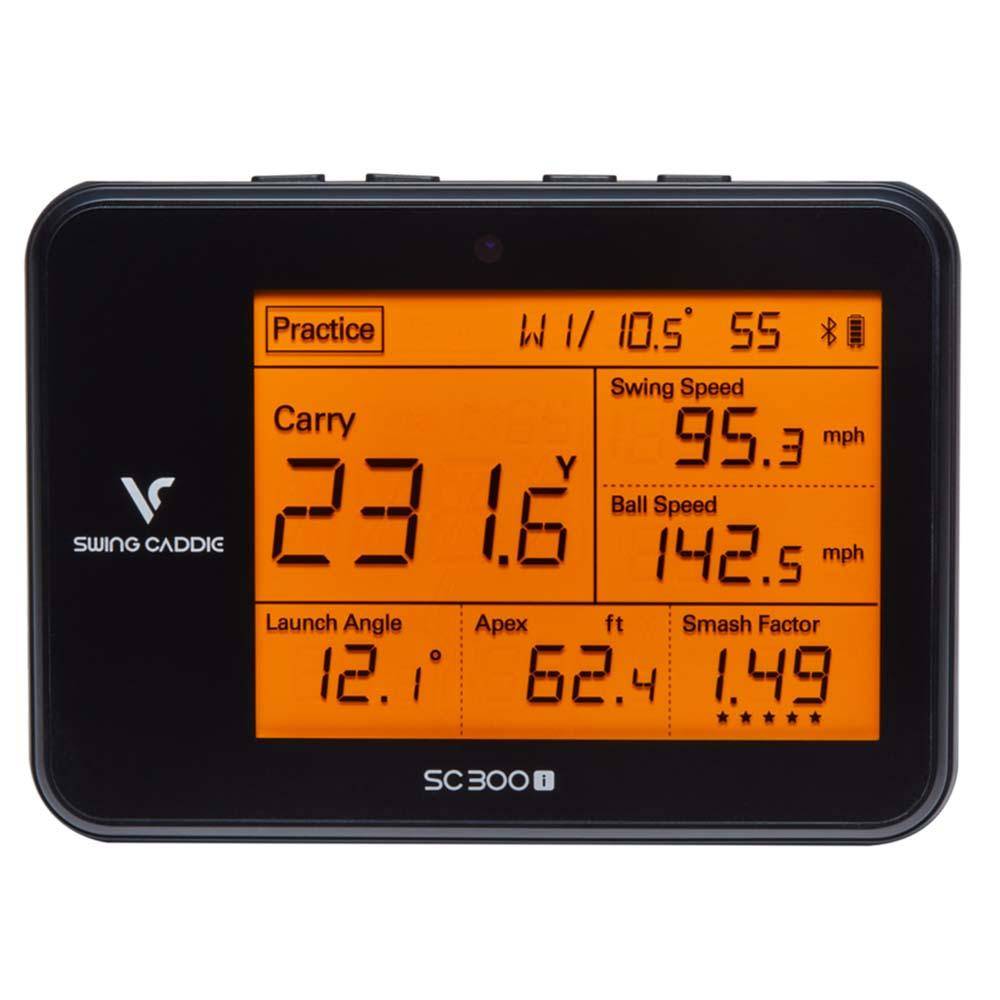 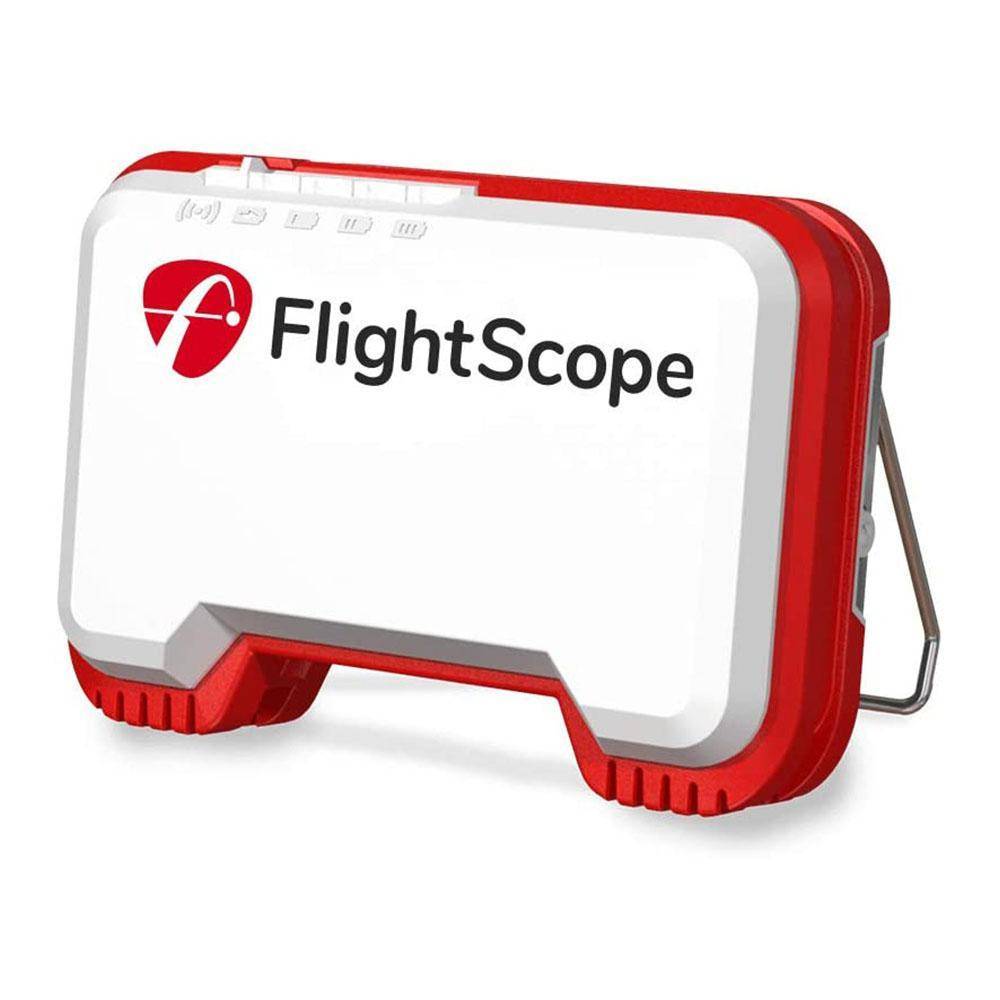 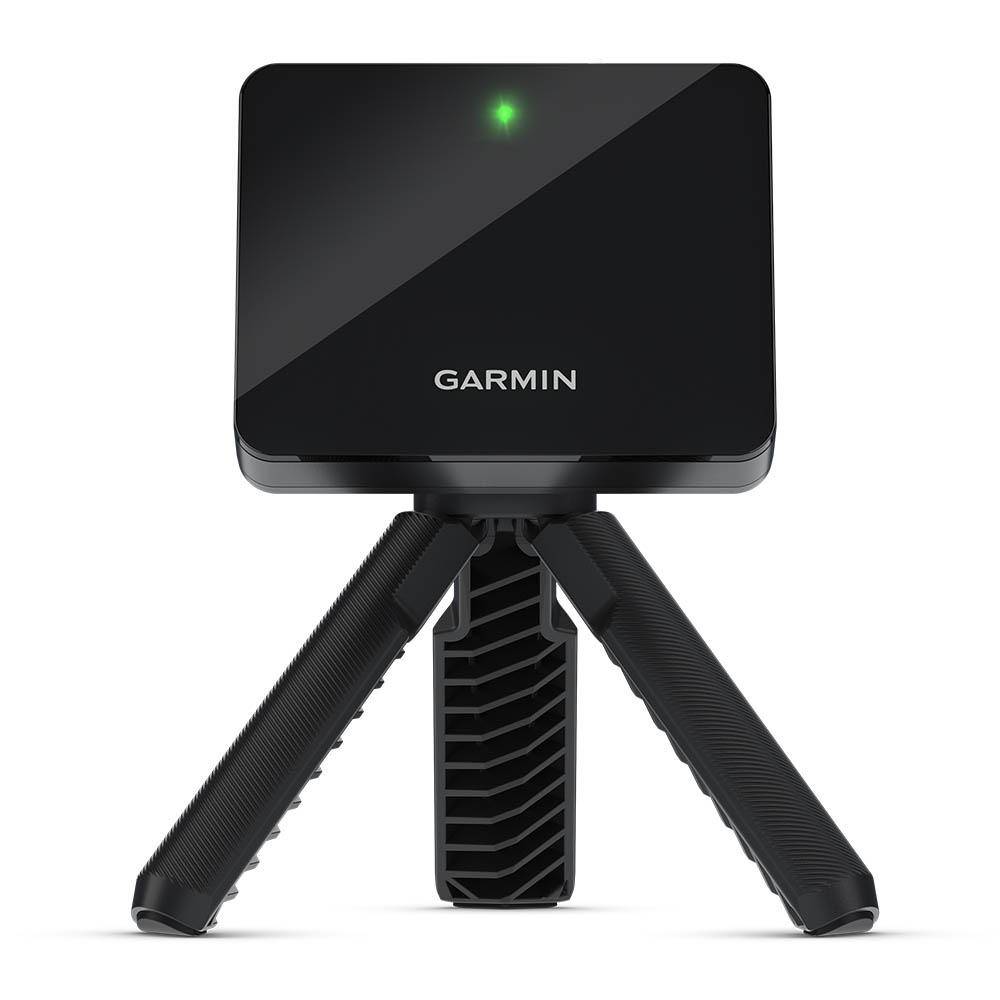 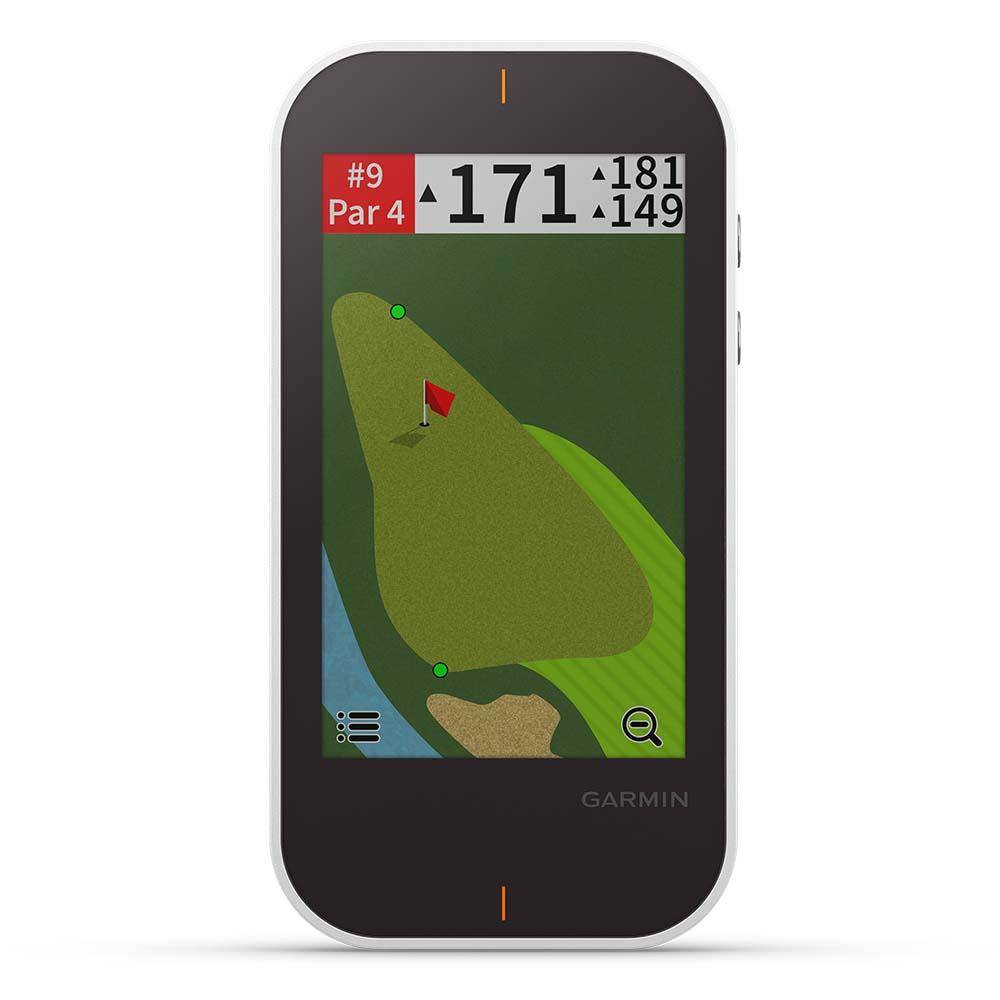 Data Visualization on These Under $600 Golf Launch Monitors

Data visualization refers to how well your stats are compiled and displayed so that you can visually review your data and process your performance to help you make changes and get better. The Rapsodo earns the top spot here.

Gabe calls the interface "an absolute pleasure to use." It has a great map overview of where all shots land out on the practice range. It shows the data points and the stats range, which is easy to compile. Overall, it is graphically great design.

Great on-screen data visualization with different options to view your stats during sessions. Post-session, it does an awesome job of showing data and compiling averages, helping you save it and see if you are improving.

In the third spot is the R10. The main drawback is that it is a little more difficult to navigate the screens in-app, especially since it does not yet offer a landscape mode visualization, which means more scrolling, making it a little more tedious to compare data and see averages. In recent communications with Garmin, we are told that they are working to resolve this.

According to Gabe, this golf launch monitor could use a slightly better app. Although, it is one of the few GLMs that lets you see your data immediately, right on the device display.

The visualizations on this companion app, in Gabe's opinion, are not laid out very well and the graphics are not so hot. In terms of usefulness, it can be head-scratching, e.g., the graphics for seeing where your ball landed on the range, which awkwardly come out of the lower corner.

Doesn't really have a dedicated app and there's no real way to compile your data over time. What you see is what you get on screen.

Without a doubt, the most important category—how accurate is the data coming out of these devices? For accuracy, Gabe give the SC300i the win.

Gabe found this one to be extremely accurate throughout his bag, from driver all the way down to wedge. He verified his readings on the range with his rangefinder, and found the SC300i to do a bang-up job!

Holding up the number 2 position is a tie between the R10 and the Mevo again. Gabe found both units to do really well with wedges, which sometimes holds GLM devices back in terms of high swing speeds.

Not quite as good as the Mevo or R10, but did good enough to trust the numbers coming out of this device.

Gabe found this device to consistently underreport the data, especially with wedge shots. But he does mention that he knows that a lot of people experience good accuracy with the Rapsodo.

Sometimes good, and sometimes not. You don't know if the ball went left or right, like with other devices. It only gives you the distance, so if you really push one right or yank one left, the G80 may not give the most accurate readings.

How well do these units stand the test of time? For the most part, build quality is great, with a couple of notable exceptions. Both Garmins, the Mevo, and the SC300i tied it up for first.

In this 4-way tie, the materials used and the construction are solid. We'd like to add that both Garmin units are water-rated to IPX7, which means that they can hold up to splashes, rain, or snow.

Gabe had problems with this device in the sun because you have to have the phone on the device, and it kept shutting down because of the heat.

The build quality seems cheaper, with plastic and a hollow feel to it.

Portability of These Golf Launch Monitors

How easy are these most affordable golf launch monitors to get around? Do they travel well? Can they unit fit into a pocket on your bag? The Mevo and the G80 tie it up for first place.

Both of these units are tiny and very low profile. The Mevo comes with a small bag. There's no second piece to either of these devices. Both are super easy to take in and out of your golf bag.

It's a little bigger than the Mevo and G80, especially when in its nice soft shell, protective case. Gabe says it just slides into the big pocket on his golf bag.

It's nice that if folds down and comes with a case.

It's much bigger than the other devices, but Gabe feels this may be a trade-off for accuracy. If you buy it at PlayBetter, you'll get a nice case that is perfect for setting your unit on because the case is about the thickness of a golf mat, bringing the SC300i level with your ball.

The biggest device of all, it's bulky and comes in a soft sack that is not the most protective.

You want your device to last at least a few sessions on the range. Here's how these portable golf launch monitors under $600 measure up.

Bigger unit can mean more battery, and the ESB1 provides an incredible 20 hours of battery life!

Has a claimed battery life of 15 hours, but Gabe feels like he actually gets more than that out of it—4 or 5 rounds easy!

Again, due to a larger size, you'll get multiple sessions with this unit's 12-hour battery life.

You will get up to 10 hours of battery life indoor and outdoor.

Offers 8 hours of battery life, so you will need to charge it a little more than the rest.

By far, this launch monitor offers the lowest battery life of 4 hours. This, of course, is a trade-off for its very portable size.

In his video, Gabe gives some of these unique devices extra points for their extra features. Here's how it breaks down.