How To Buy Your SkyTrak

Today’s golfer has an abundance of options when it comes to golf launch monitors and home golf simulators. There are a lot of incredible products available and for prices that are much more reasonable than they were just a handful of years ago.

SkyTrak is definitely one of those excellent options. But is it the right choice for you?

There’s a lot of information to digest when shopping for a golf launch monitor/simulator. With this buyer’s guide, we’re going to give you the most essential information specific to SkyTrak.

We know you have questions. We have answers. And, of course, if there’s something important to your situation that we don’t address here, let us know. At PlayBetter.com,we’re always happy to go the extra distance to get you the information you need to make your best decision. 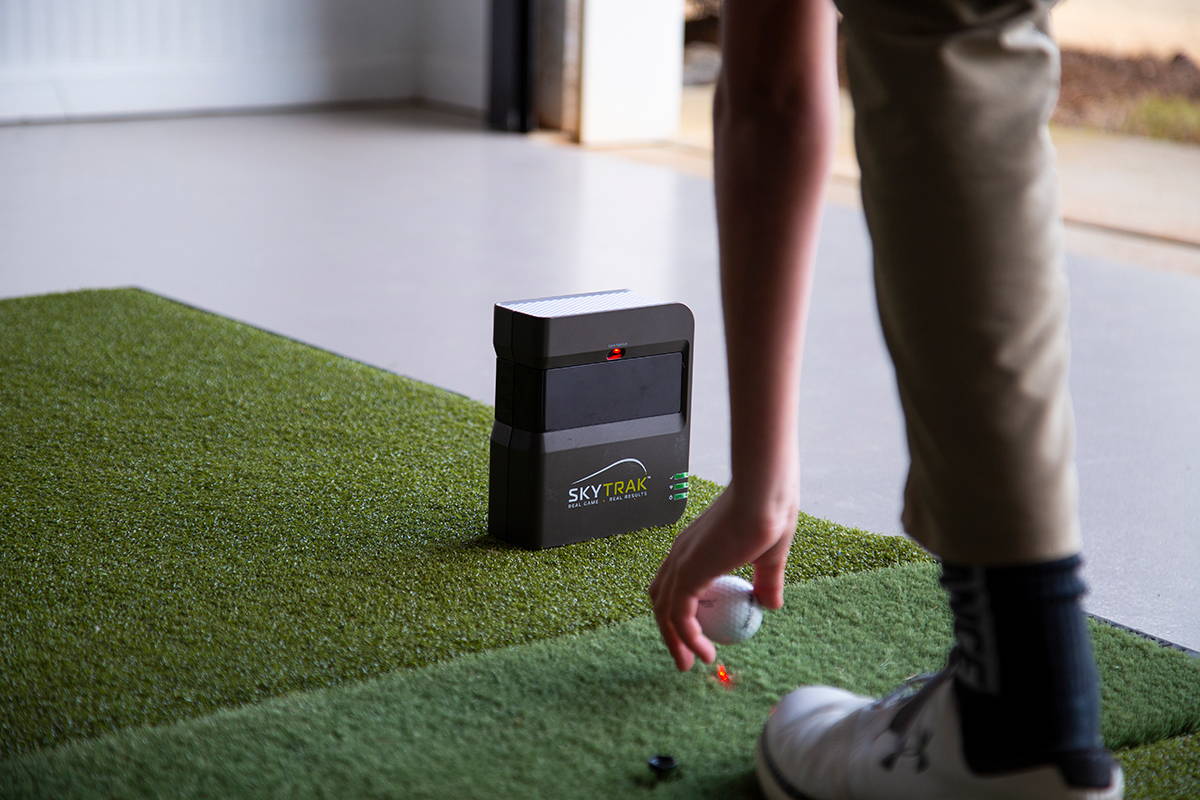 How To Select and Set Up a SkyTrak | Table of Contents

How Do You Plan To Use Your SkyTrak?

The SkyTrak is both a golf launch monitor and golf simulator in one unit. Remember, not all devices in this product class do both. Some are limited to only spitting out data and can’t simulate an actual round of golf.

With SkyTrak, not only can you use the device as a launch monitor or simulator, but it’s software agnostic relative to other similar products. More on that later. For now, the thing to understand is that you’ve got options. Options for golf courses, games, modes, etc. This is an incredibly versatile product.

Let’s look at the most common use cases. 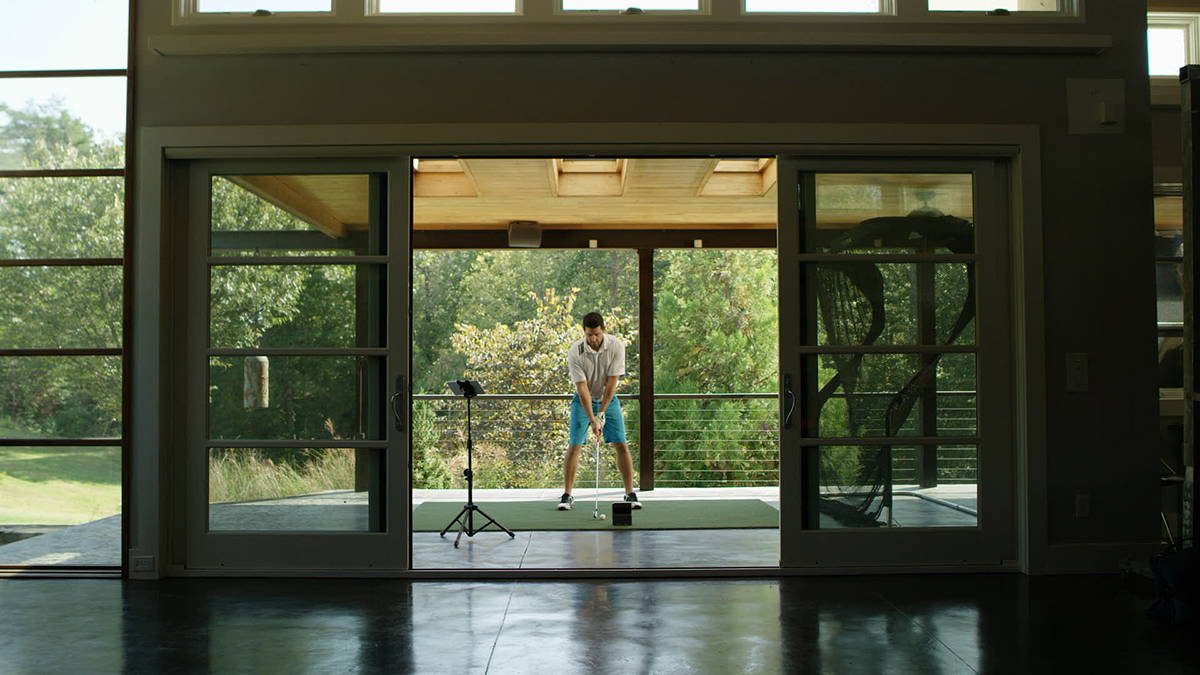 Your SkyTrak golf launch monitor is a photometric system. It’s taking thousands of pictures per second in order to accurately measure things like:

Based on those metrics, the SkyTrak can calculate:

That makes it a great game-improvement tool to be used at the driving range.

That said, this device is much bulkier than some of the others on the market. That means that transporting it to and from the range won’t be quite as convenient, as it is not going to fit easily into your golf bag.

If you’re using your SkyTrak outdoors, space is really of no concern. All you need is enough room to swing your clubs.

The SkyTrak sets up to the side of the golf ball, rather than from behind. You’ll set the device up so that you’re facing the device as you address the ball. When turned on, the SkyTrak will shoot a laser light onto the turf to show you exactly where to place the golf ball. Position the ball with the logo facing the SkyTrak. From there, it’s time to grip it and rip it.

Right out of the box, you’re going to get SkyTrak’s driving range feature. That means all of the above data points plus a shot tracer to show your ball flight.

Most people using the SkyTrak outdoors will use it as a launch monitor rather than as a simulator. And for that use, the pre-loaded driving range software is all you really need.

SkyTrak has its own rechargeable battery and serves as its own Wi-Fi hotspot so that it can operate wirelessly anywhere. You’ll need to pair the SkyTrak with your mobile device to view the information readouts. 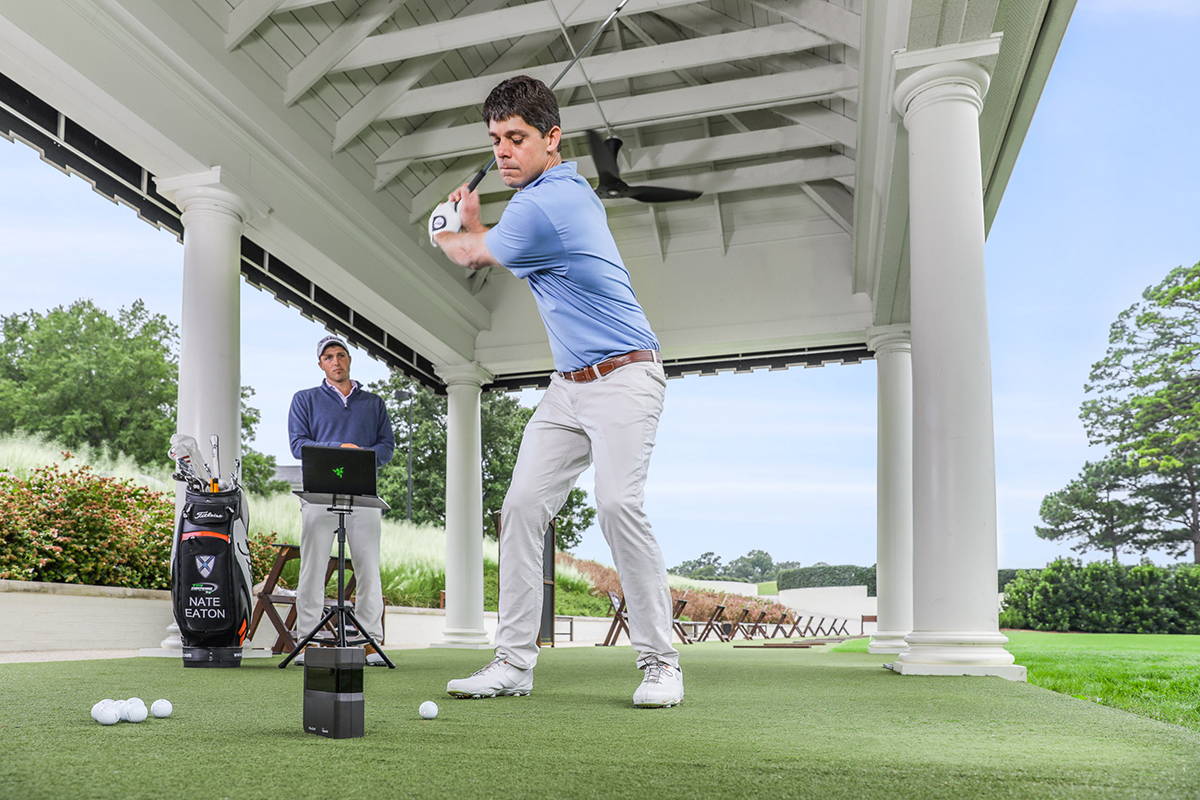 The SkyTrak really is designed primarily for indoor simulator use. It is not weatherproof, and it’s not as portable as other options. So, outdoor use is limited. Indoors is where this device really shines with incredibly accurate data, software options for both iOS and PC, and space-saving setup requirements.

One of the great advantages of this personal golf launch monitor/simulator device is that it reads from the side rather than from behind. That’s a big deal if space is tight as it will save a lot on room depth requirements.

Software compatibility is a big differentiator for SkyTrak. Where other units only work with limited software options, SkyTrak is compatible with seven different software packages, albeit each with a subscription or purchase price.

The only equipment you need for indoor golf simulation is your SkyTrak, a mobile device or PC, a mat, and a net. But to take it to the next level, you’ll probably want to incorporate a projector and impact screen. And for the very best experience, you’ll want to invest in a robust gaming computer capable of running simulator software with fast response times. 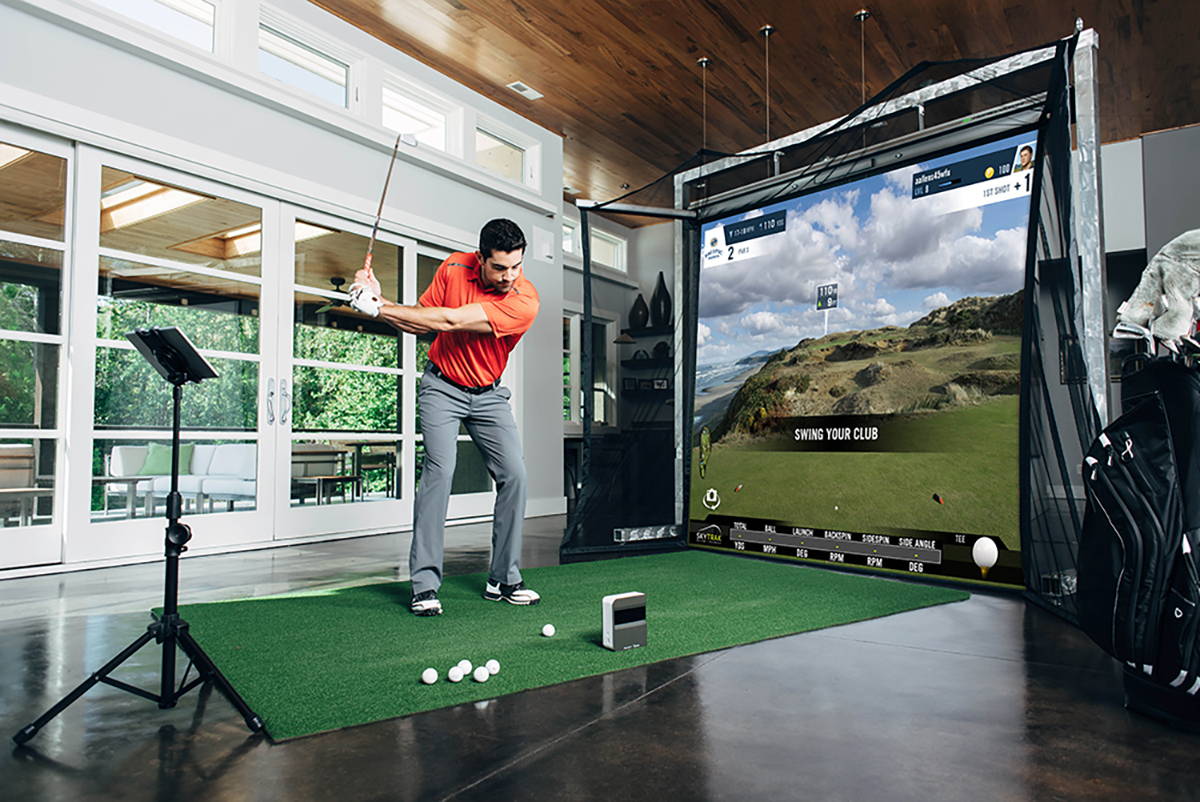 PlayBetter.com offers turnkey indoor golf simulation solutions. We’ve assembled everything you’ll need to accompany your SkyTrak and your computer or mobile device. That includes side barrier netting, landing pad turf, your choice of a hitting mat, a golf simulator projector, a ceiling mount, an HDMI cable, and an HDMI-to-Lightning cable. Save yourself a lot of shopping time with these options: 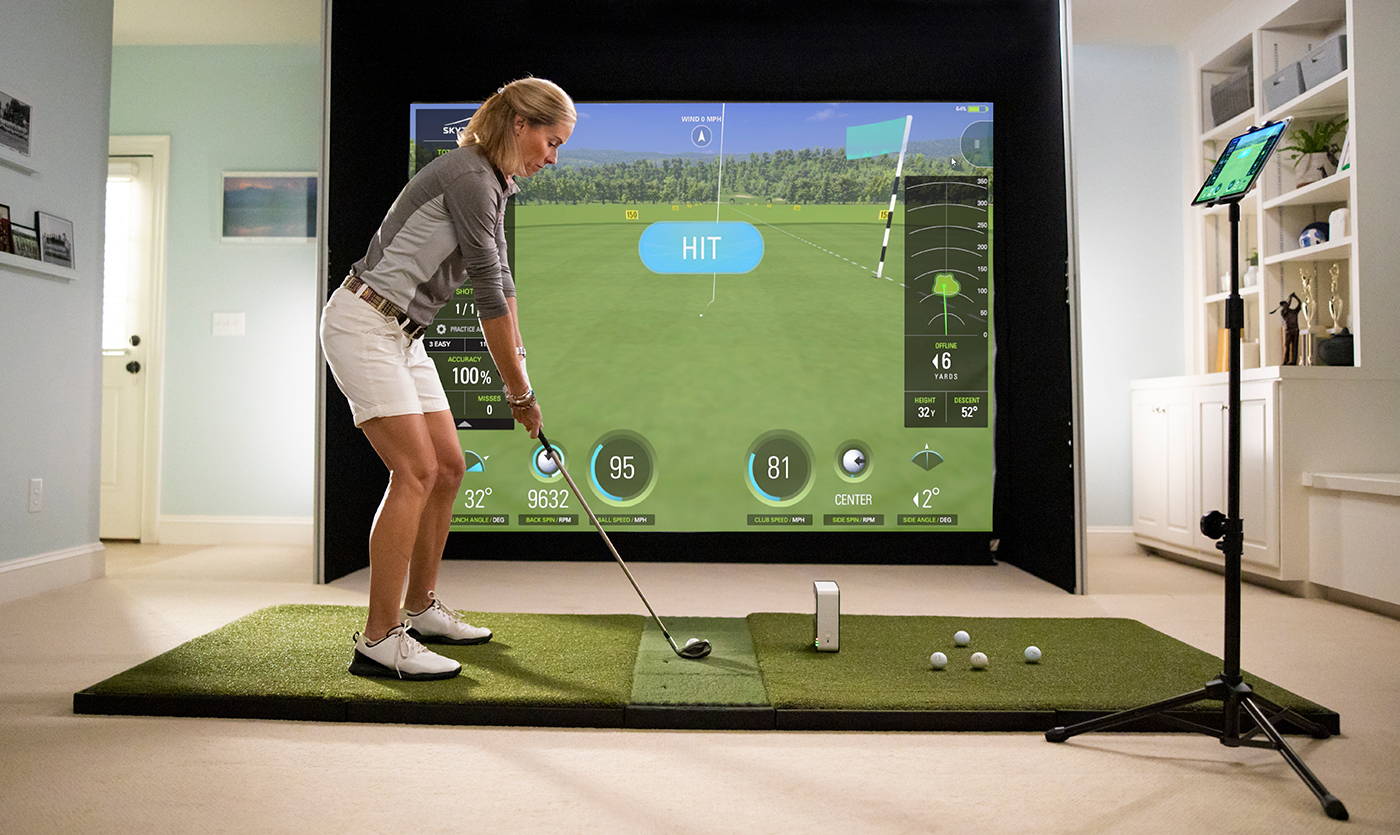 If you’ve got the space and you’ve got a golf simulator, there are a lot of different ways to pull off indoor golf. Your budget and your creativity will be the two biggest factors in determining what works for your situation. Here are some of the common components you’ll want to consider: 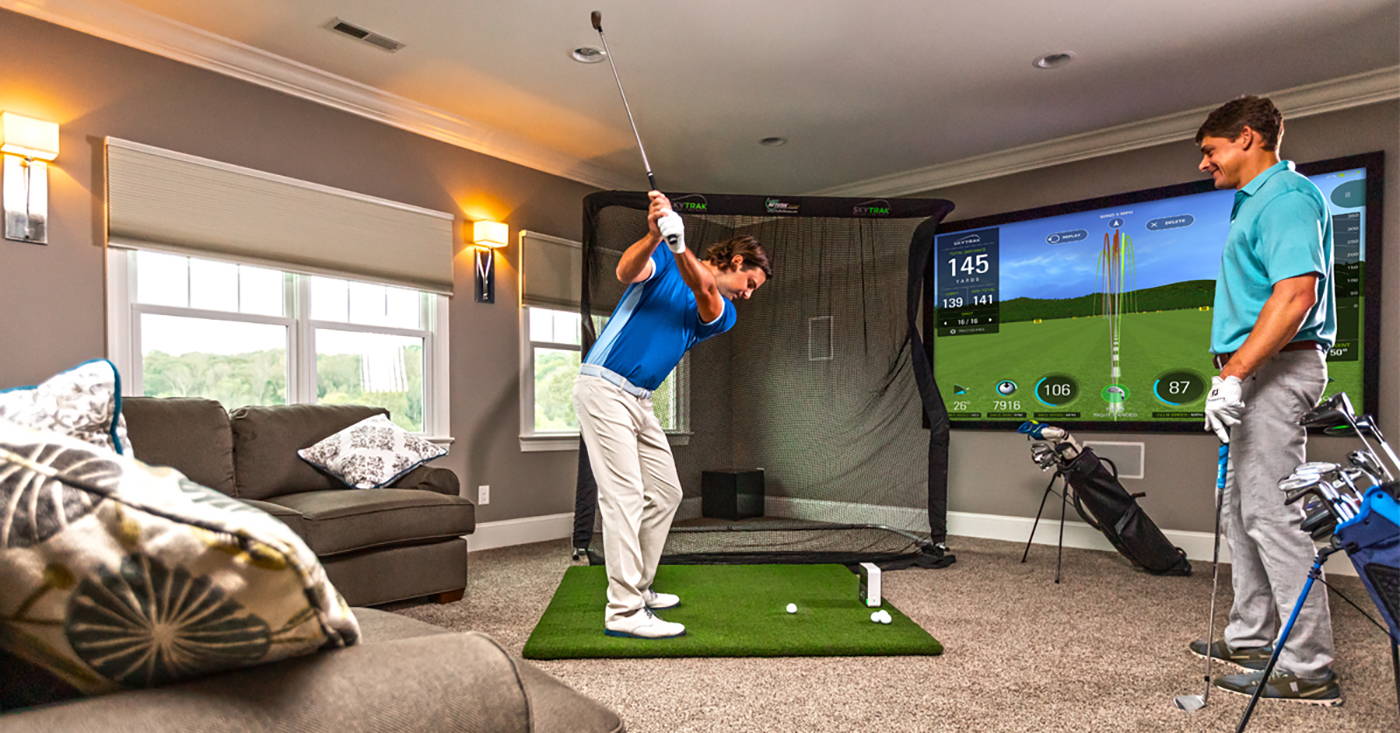 Do You Need the SkyTrak Protective Case?

The short answer to this question is, no, you do not need the protective case. That said, all it takes is one errant shot or some other accident for you to wish you’d spent just $150 to protect your investment.

The SkyTrak protective case is a high-quality, strong, and durable metal impact- and scratch-resistant case that protects against drops and bumps. The smart design allows you to connect a wall charger without having to remove the Skytrak. You can also easily access the power button and see the LEDs through the precisely positioned openings. It even comes with adjustable legs for leveling or raising your SkyTrak.

So, no, you don’t need the protective case. But, yeah, you should probably get it. 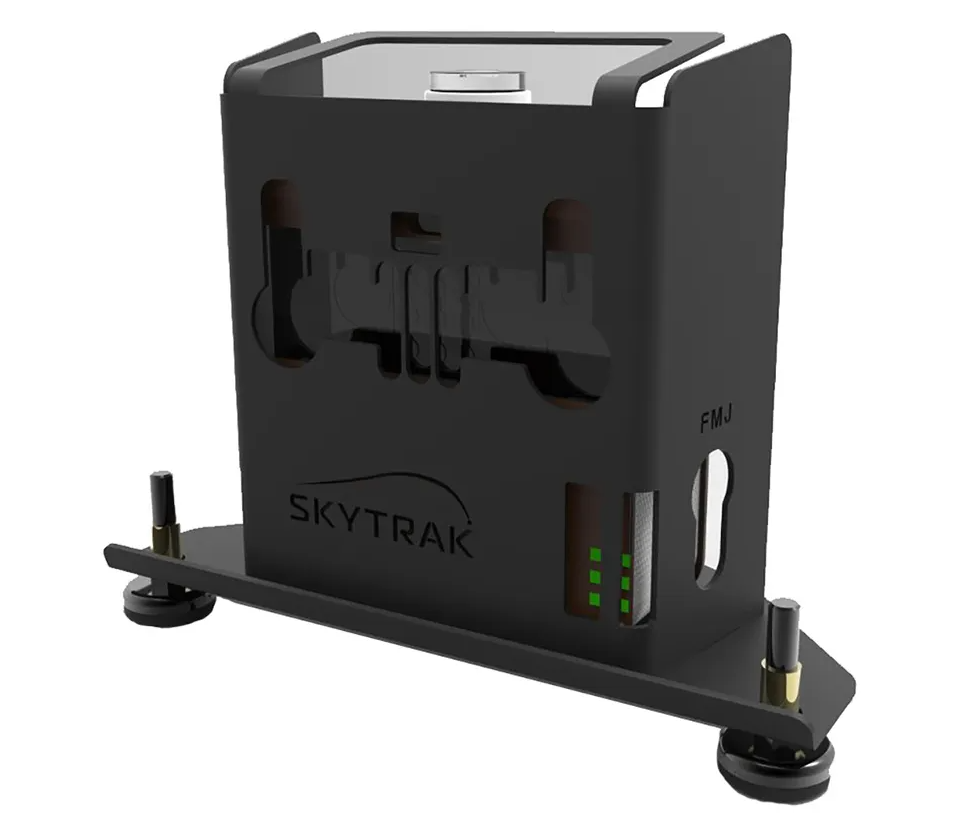 Is a Photometric Simulator Better Than a Doppler Simulator?

As we’ve discussed, the SkyTrak is a photometric system. That means that it’s taking thousands of pictures per second in order to accurately produce precise measurements of what the ball is doing immediately after impact. Those measurements are used with sophisticated flight algorithms to simulate a realistic shot shape, flight path, and distance that would represent your shots on an actual course.

A doppler system tracks how your ball flies and where it lands and then calculates, rather than measures, the data that it outputs. It can struggle to measure spin and spin axis when the ball is hit a short distance into a net or screen.

That’s another reason that the SkyTrak is most often used for indoor simulation use, even though it can still be an excellent outdoor golf launch monitor. 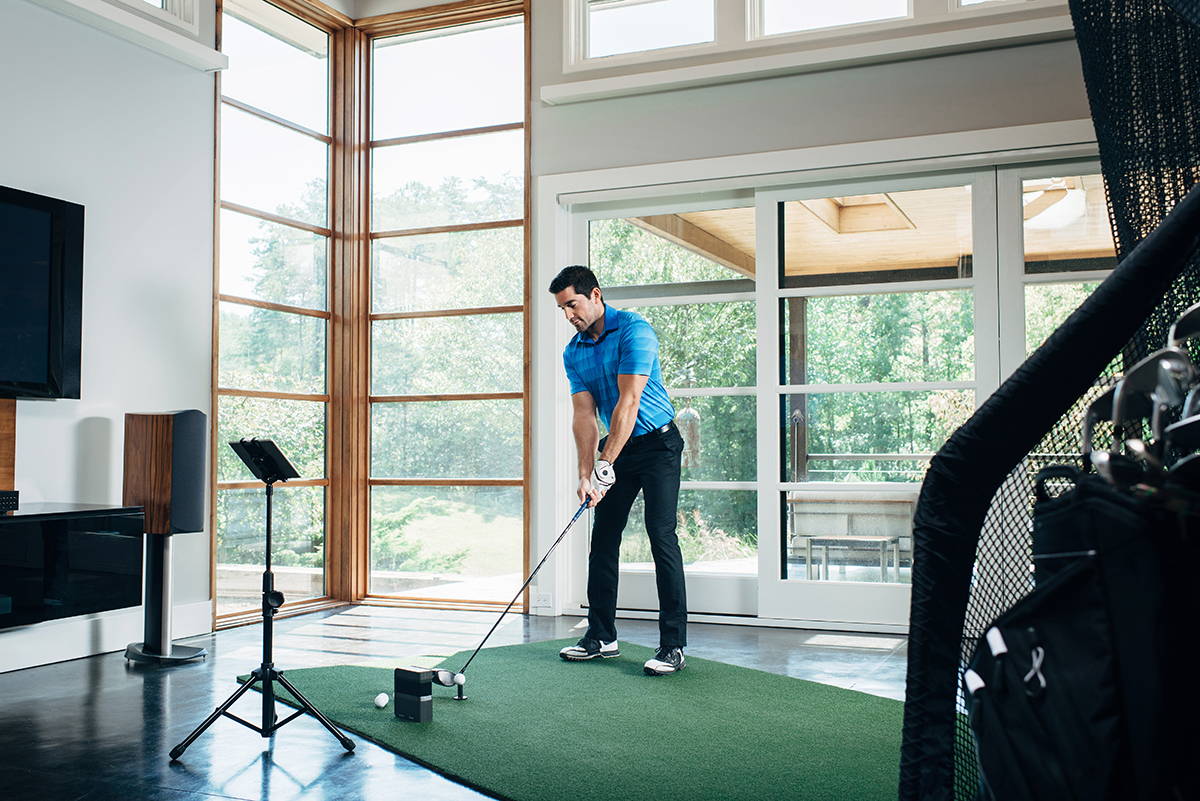 SkyTrak is as software agnostic as any golf simulator you can buy. That’s a great advantage as it allows you to choose from a variety of games and golf courses, including pretty much every famous course in the world, and it gives you options for both PC and IOS.

Here’s a breakdown of the hardware and processing power required to operate each software option.

Supported iOS devices include iPad Pro Gen 1 or newer, iPad Air 2019, or iPhone 8 or newer. E6 Connect may not run well on older or weaker devices. 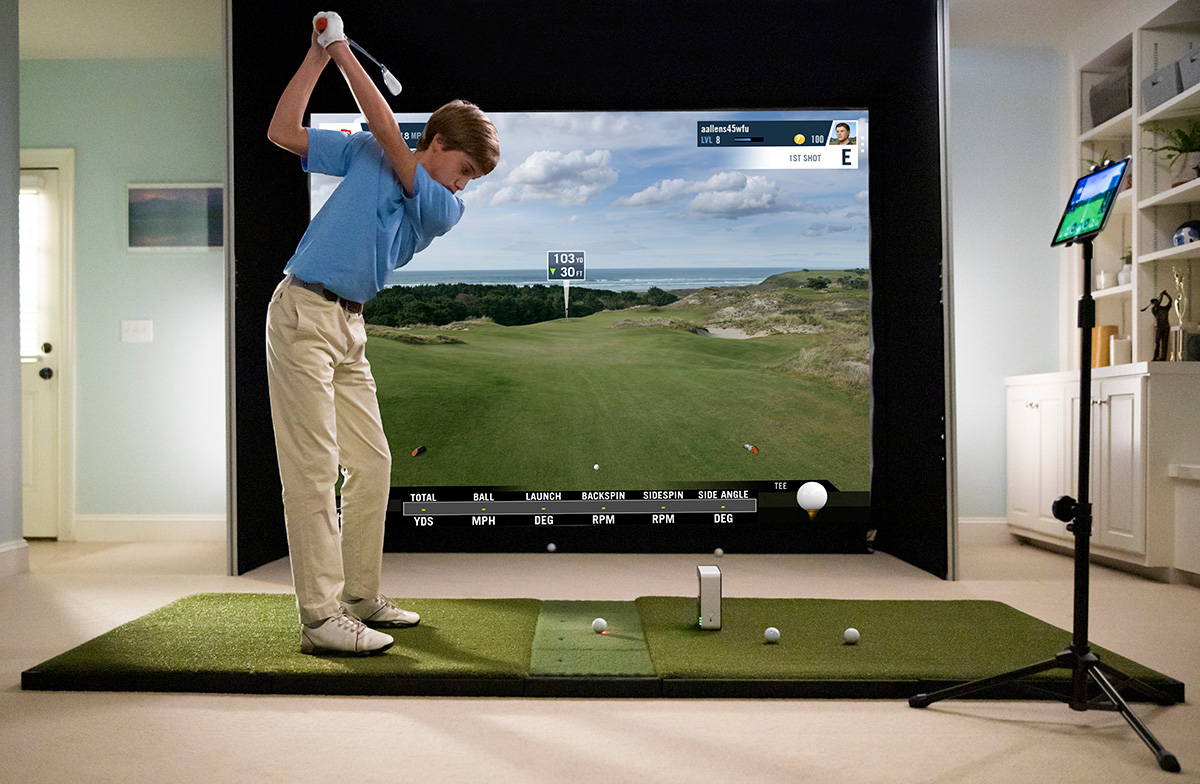 What Is the SkyTrak Warranty?

If you buy your SkyTrak from PlayBetter.com, you’re eligible for SkyGolf’s 6-month Customer Limited Warranty, or you can purchase the 1-year Extended Warranty. So, you can be confident that you’re covered from any product defects for at least 6 months from your delivery date. 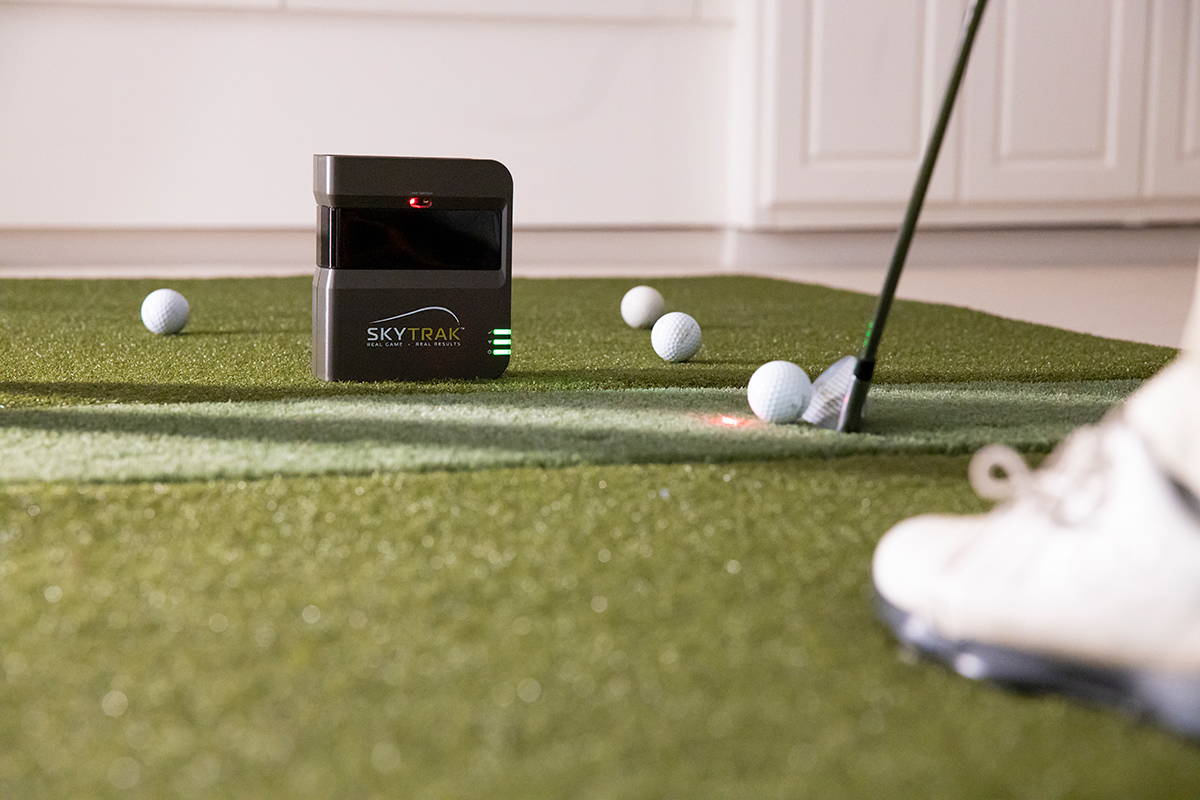